Aphrodisias is a remarkably preserved Roman-period city in ancient Caria, south-west Türkiye, which was famous in antiquity for its sanctuary of Aphrodite and its marble sculptors. Known to tourists and travellers since the 18th century, it has been the subject of scientific exploration since the early 20th century. New York University has conducted extensive excavations since 1961 under the aegis of the Turkish Ministry of Culture and Tourism, since 1995 with the collaboration of Oxford University

The archaeological site of Aphrodisias was inscribed on the UNESCO World Heritage List at the 41st World Heritage Committee session held in Kraków on 9 July 2017.

The excavated monuments of Aphrodisias and their associated sculptures and inscribed texts document the social history and visual culture of an ancient city in unusual detail. Aphrodisias sheds valuable light on larger issues such as the interaction between Greek and Roman identity, the functioning of empire, religious conflict and accommodation, and the transition from antiquity to the Middle Ages. It makes a major difference to our understanding of the ancient world.

The site has been investigated continuously by the current New York University project since 1961, first under the direction of the late Professor Kenan Erim, and since 1991 under that of Professor R.R.R. Smith. The current project focuses on documentation and conservation of previously excavated monuments, on targeted new excavations, and on scientific research and publication.

The BIAA is also supporting further excavations of Aphrodisias’ Tetrapylon Street in the 2022 season. Work will focus on final investigation and excavation at key points along the already exposed parts of the street. This work will form part of the realisation of a new visitor route from the Sebasteion towards the Tetrapylon to the north and towards the Place of Palms to the south. Remaining necessary interventions include the excavation of c. 0.40 m stratigraphy left above the Late Roman walking surface of the west colonnade and that of earthquake debris underneath rooms of the Dark Age Complex. On the opposite side of the street, the main focus will be completing the excavation of the east colonnade and uncovering its back (east) wall. The earth still present in front of the back wall will be removed, which will greatly improve the overall appearance of the area. Where the back wall is not preserved, the earth borders of the trench will be cut back further at an angle to ensure long-term stability. It may also be necessary, in conjunction with digging the trench for water-evacuation from the Sebasteion Propylon to the South Agora, to excavate parts of the badly disturbed area between the Sebasteion Propylon and the North Agora. Restoration of the street paving will also be continued. 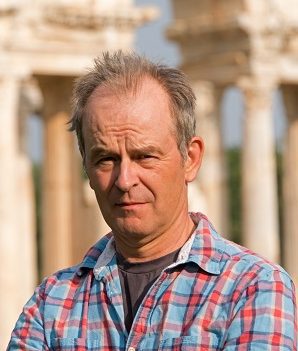