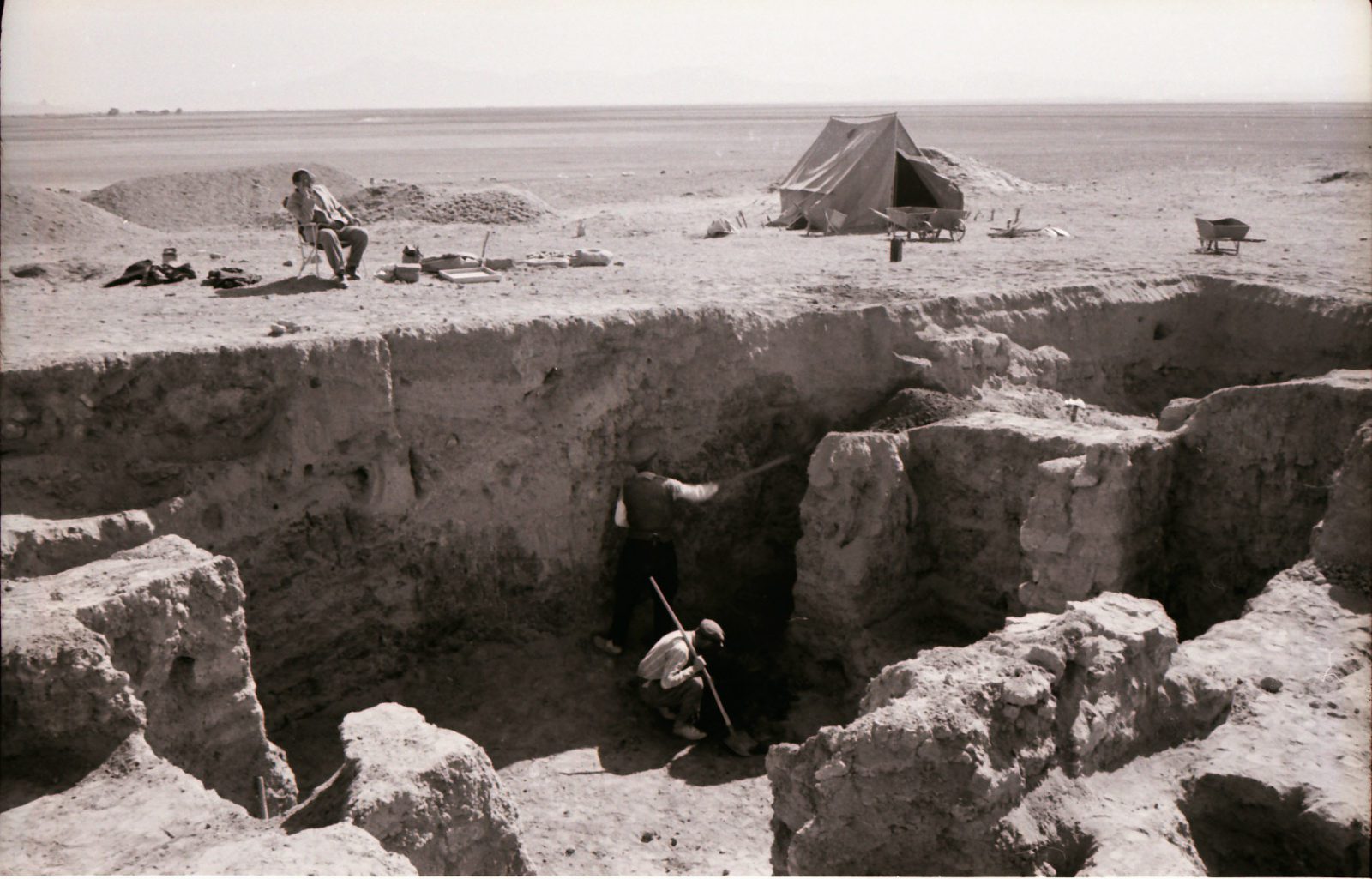 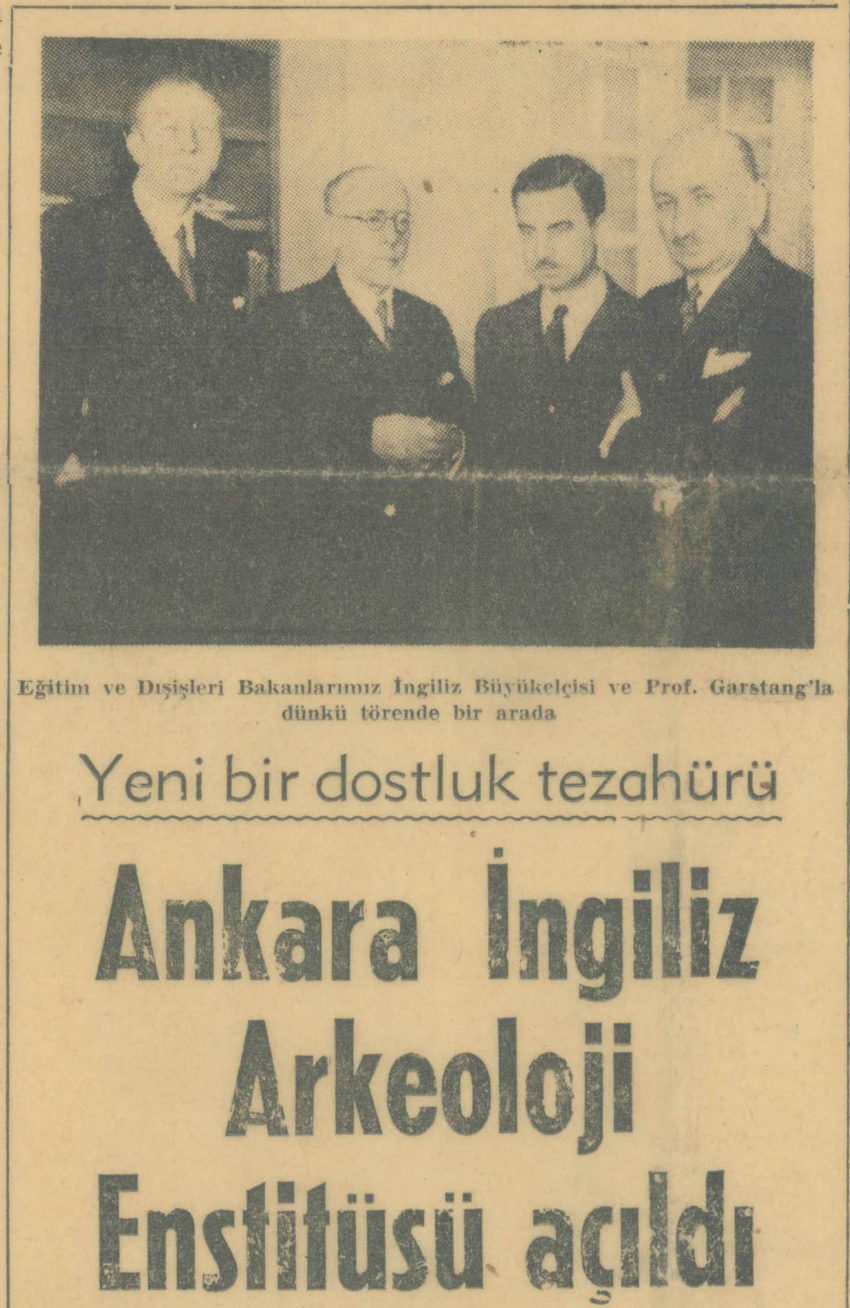 The birth of the British Institute of Archaeology at Ankara

We owe the foundation of the Institute mainly to the ideas and enthusiasm of John B.E. Garstang, also founder of the Institute of Archaeology at the University of Liverpool. Garstang first conducted research in Turkey between 1907 and 1911. He was inspired to study the Hittites by a visit to the excavation of their capital at Boğazköy-Hattusas, and directed excavations at the site of Sakçagözü near Gaziantep, which produced notable monuments and documents of the Neo-Hittite and Assyrian periods. After working in Palestine and Egypt, he returned to Turkey to start an excavation at Mersin. In 1946, during the first season of excavations after the Second World War, Garstang realised his ambition to create a British Institute in Turkey, with the help and support of his nephew Oliver Gurney, a Hittite scholar who was the founding editor of Anatolian Studies and later President of the BIAA. Garstang’s interest in Anatolian prehistory and the Hittite empire led to the decision to locate the Institute in Ankara and not in Istanbul, unlike other foreign research institutes. On 22 November 1947, the Turkish Council of Ministers ratified the foundation of the British Institute of Archaeology at Ankara and, the inauguration ceremony took place in January 1948. Garstang was the first Director until he was succeeded by Seton Lloyd in 1949. 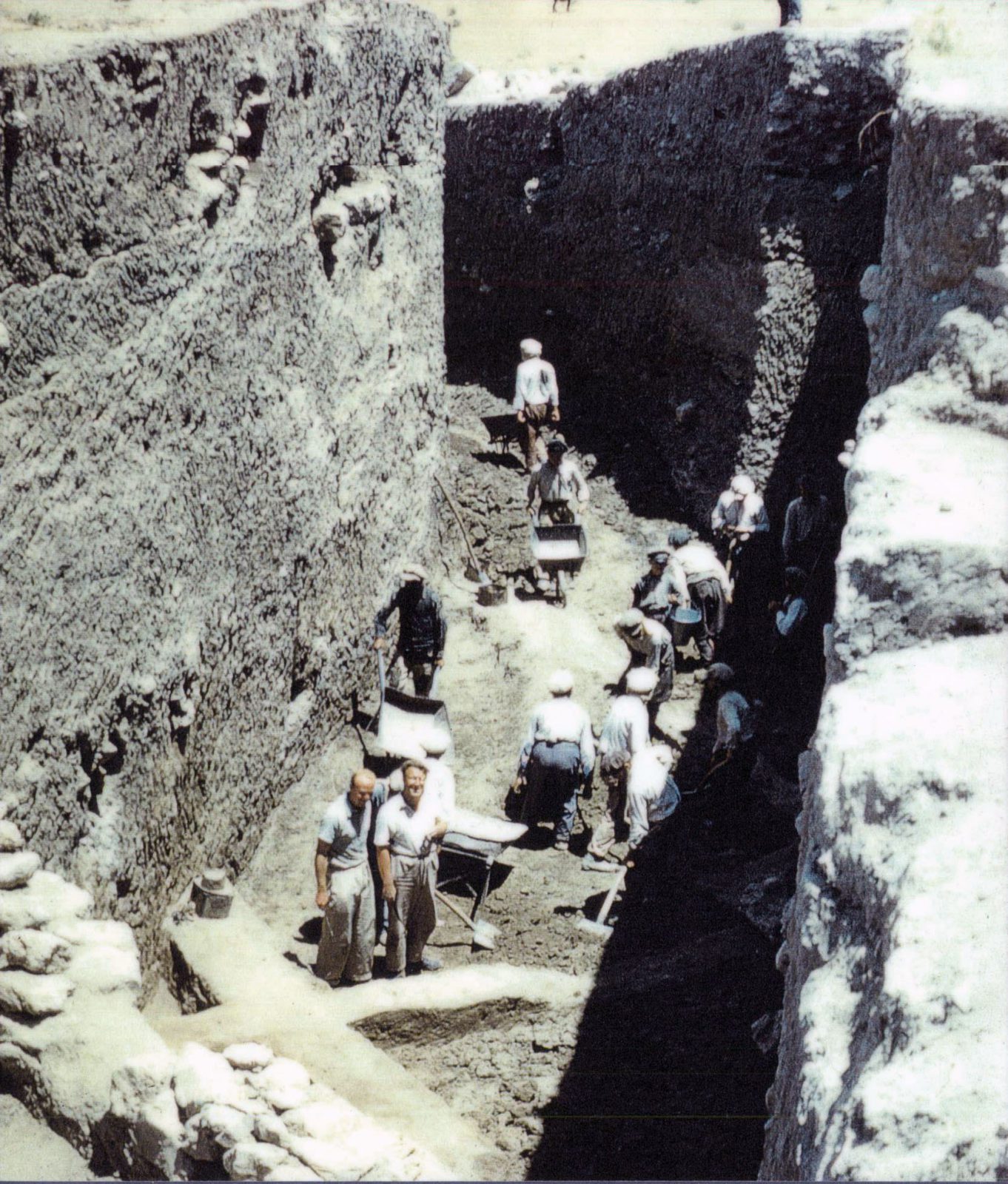 Upon his return to England, Garstang became President of the Institute, and a council was formed to oversee the Institute’s activities in the UK and in Turkey. One of the council’s first decisions was to start a journal, and 1951 saw the birth of Anatolian Studies, which became the flagship publication of the Institute and a point of reference for all archaeology-related disciplines in the region. Meanwhile, in 1949 Seton Lloyd, who had previously been working in Baghdad, became the second Director of the Institute in Ankara. Like his predecessor, Seton Lloyd was an active field archaeologist who surveyed in Harran and Alanya and led excavations at several sites such as Polatlι, Sultantepe and Beycesultan.

Although the main focus of the Institute in its early years lay firmly within the area of prehistoric archaeology, other important research projects were also initiated at this time. Among them were surveys of Classical and especially post-Classical remains in Cilicia, studies on medieval Harran, the uncovering and restoration of the 13th-century wall paintings in the Hagia Sophia of Trebizond and significant epigraphical surveys of the country. 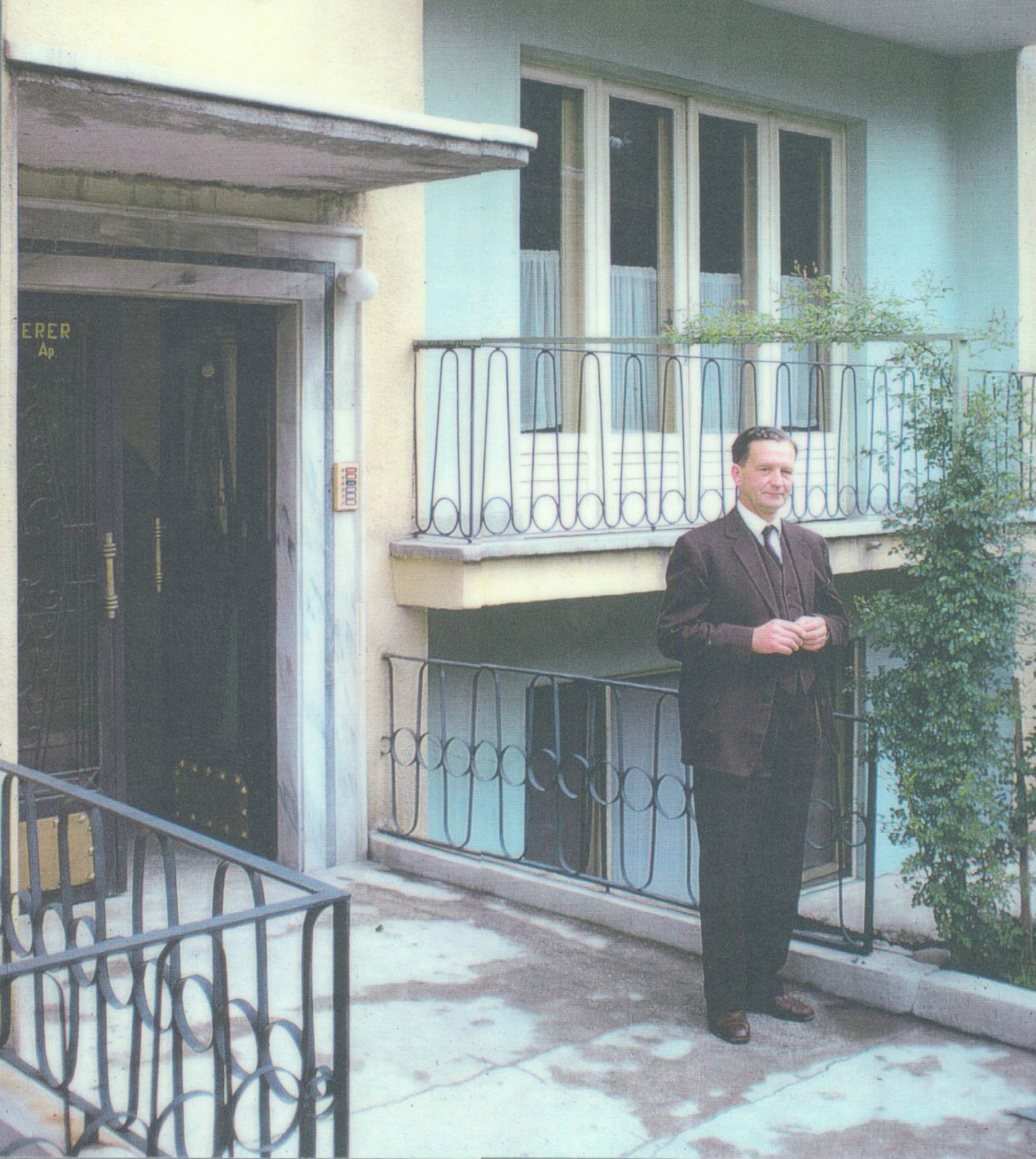 Expanding the Research Focus: From the Neolithic to the Byzantine periods

In 1961, Michael Gough was appointed the third Director of the Institute. Gough was a Byzantine and early Christian archaeologist, who conducted surveys and excavations in south-east Turkey, ancient Cilicia. He directed excavations at the monastic complex at Alahan, a church at Dağ Pazarı, and at the church of Eski Gümüş in Cappadocia.

Meanwhile, James Mellaart, Assistant Director of the Institute from 1957 to 1961, carried out excavations first at the Neolithic and Chalcolithic site of Hacılar near Burdur, and subsequently at the very large Neolithic site of Çatalhöyük, which had been discovered by Mellaart and colleagues in 1957. The work at Çatalhöyük revealed an unexpectedly sophisticated Neolithic town, whose spectacular mural art, the oldest yet known, changed our way of thinking about the civilisation of that period. Work at the site was discontinued in 1965, but resumed in 1993 under the direction of Professor Ian Hodder. 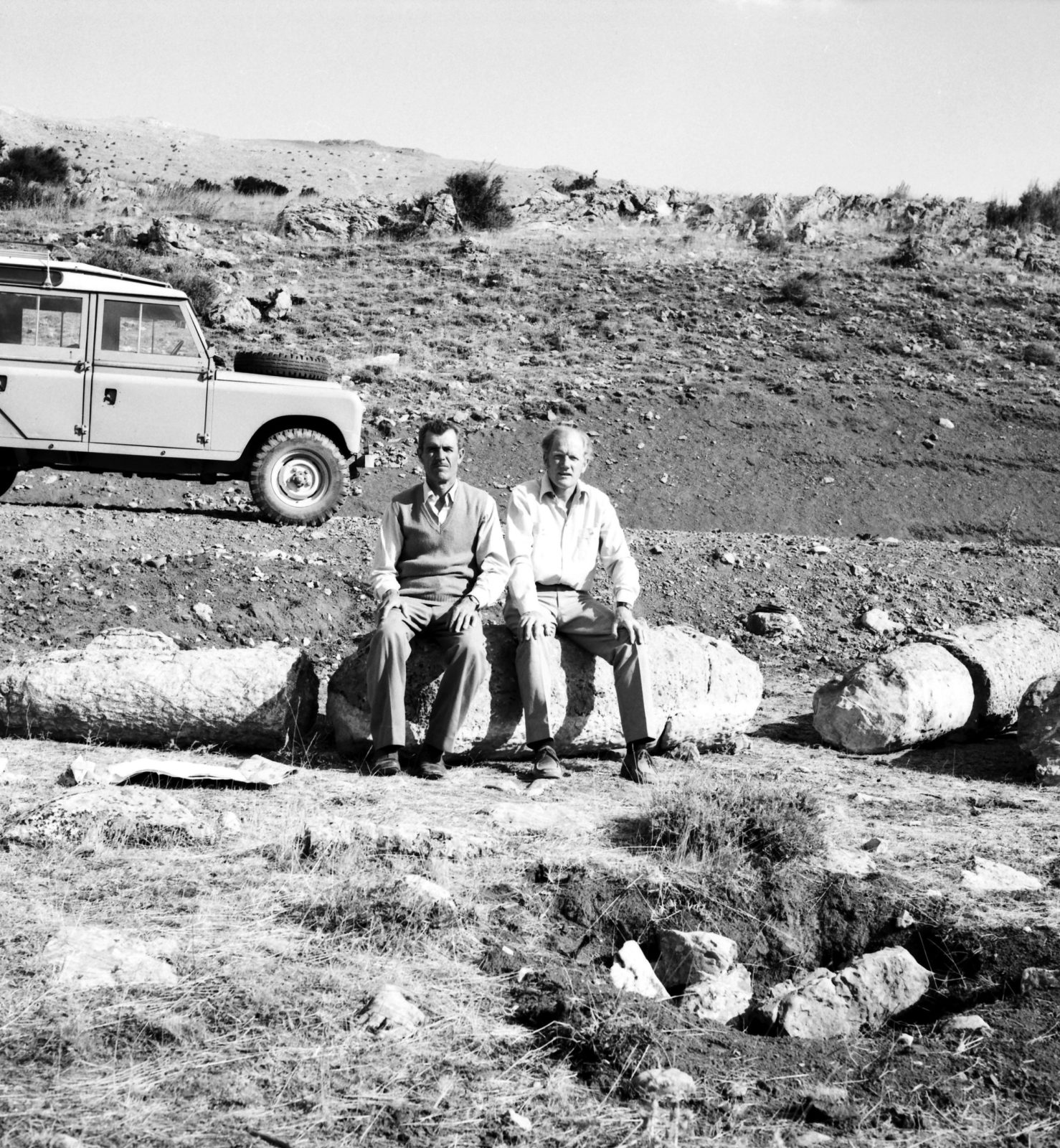 In 1968, David H. French was appointed the fourth Director of the Institute and remained in post for 25 years, overseeing an expanding number of staff at Ankara and an increasing range of projects.

Rescue excavations at Aşvan Kale and Tille Höyük attracted most of the Institute’s focus during the 1970s and 1980s. At those sites, French employed radically new archaeological methods — such as dry-sieving and, especially, flotation — that would become exemplary for later excavations. Among other projects were the large-scale survey of Pisidia by Stephen Mitchell, the survey of the Classical city of Oinoanda and neighbouring city of Balboura in Lycia and the excavations at Amorium. In the field of epigraphy, French conducted a large-scale survey of the milestones of Asia Minor, resulting in a major reference work, while David Hawkins began a long-term epigraphical project on Hieroglyphic Luwian inscriptions. Under David French’s directorship, a significant expansion of the Institute’s library and reference collections — including pottery sherds, epigraphic squeezes, and botanical specimens — transformed the Institute from a base for excavations and field projects into a major regional research centre serving a range of archaeology-related disciplines. 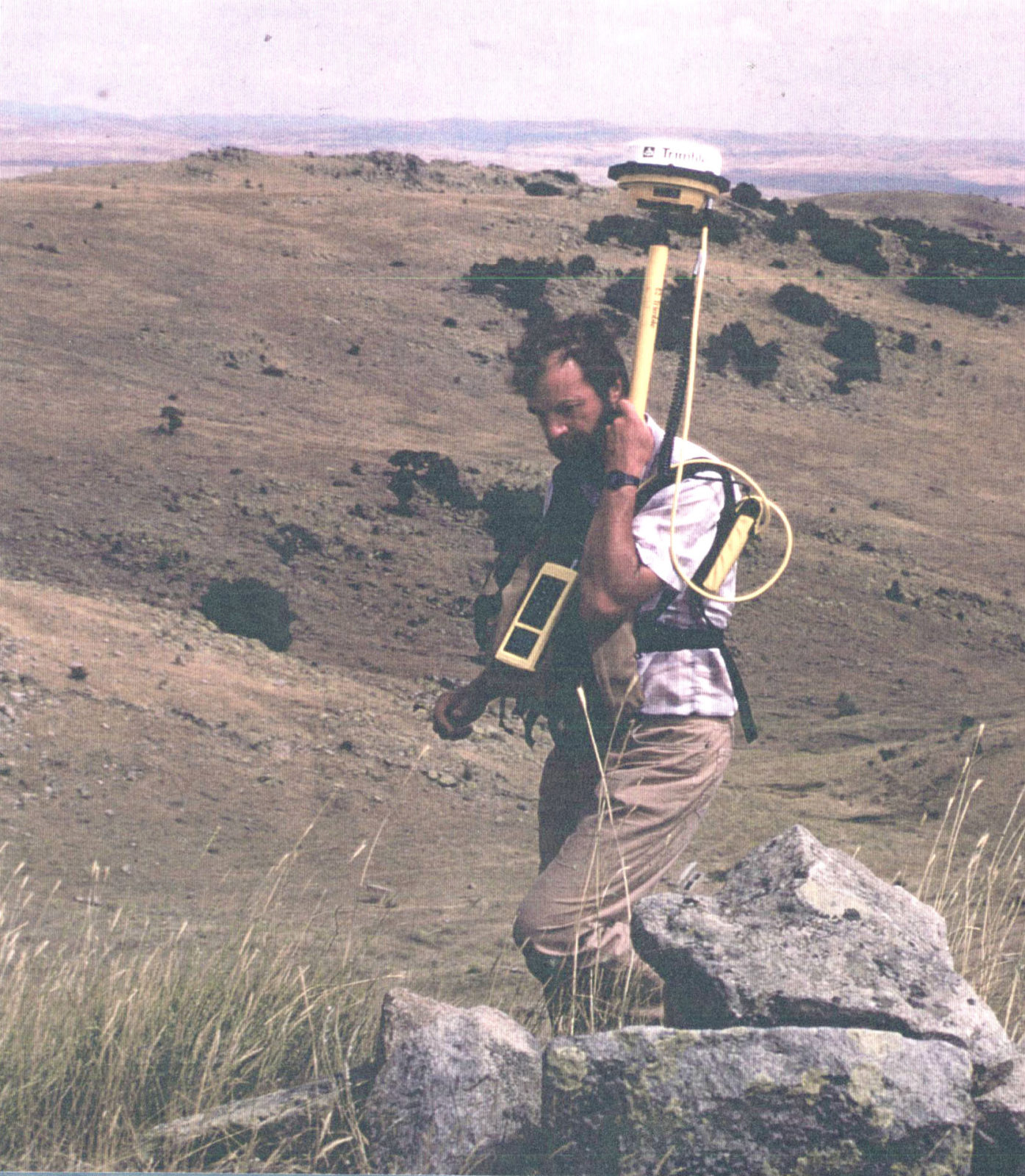 A Geographical and Disciplinary Expansion

In 1993, David French retired, having consolidated the Institute’s position as a major research hub for Anatolian archaeology. Anthropologist David Shankland acted as Director from 1993 to 1995, before Roger Matthews was appointed fifth Director in 1996. During his time in office the Institute supported a wide range of archaeological and other projects, including the Ancient Paphlagonia Survey (Çankırι), the Kerkenes Dağ Survey, the Madra Çay Survey (Ayvalık), the Çatalhöyük Excavations, and the Amorium Excavations.

In 2001, Hugh Elton was appointed the sixth Director of the Institute. He launched the Göksu Archaeological Project in an area earmarked for flooding by the Mut dam. The project aimed at revealing changing settlement patterns in the river valley and the uplands via a multi-period survey. In 2004, the name of the institute changed from the ‘British Institute of Archaeology at Ankara’ to the ‘British Institute at Ankara’ in order to reflect the new cross-disciplinary direction of research. In 2006, Lutgarde Vandeput was appointed the seventh Director of the BIAA. She led a multi-period and multi-disciplinary archaeological survey in Pisidia, and undertook the task of furthering the expansion of the Institute across the humanities and the social and political sciences. This was reflected in the sponsorship of excavations at Apsaros and Pichvnari in Georgia, the anthropological work of David Shankland at Çatalhöyük, and projects on climate history, the Genoese legacy in the Black Sea and the architecture of Ottoman houses. 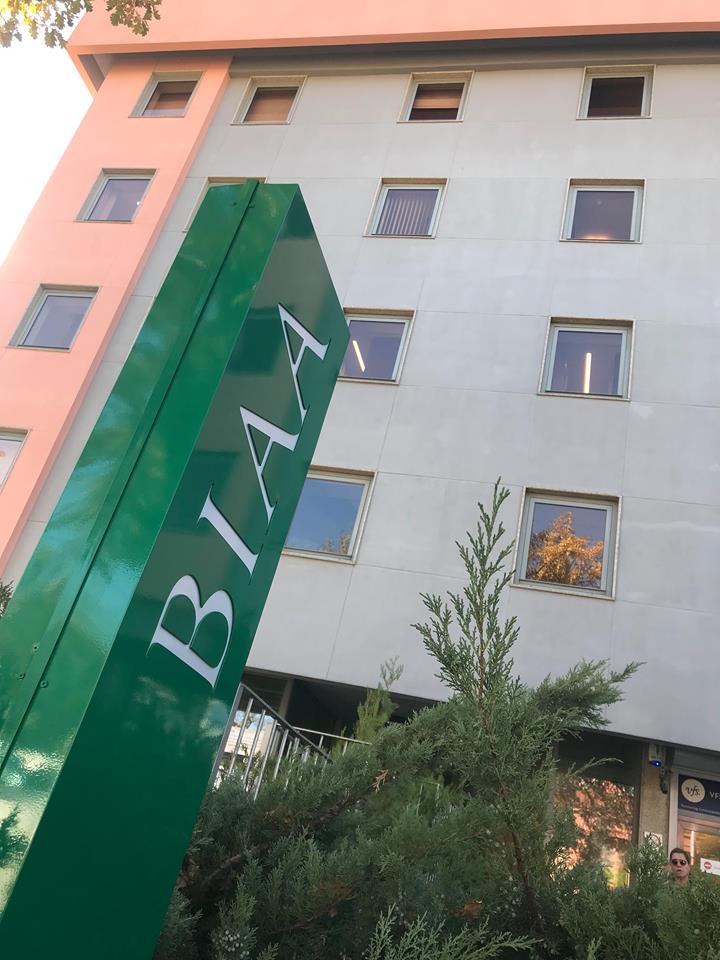 The British Institute at Ankara

The Institute continues to support archaeological excavations and surveys adopting cutting-edge methodologies at sites such as Çatalhöyük (until 2015), Boncuklu, Aphrodisias, and the Konya Regional Archaeological Survey. A series of Assistant Directors helped expand the Institute’s research remit, including historians Andrew Peacock and Daniel-Joseph MacArthur-Seal and political scientists Marc Herzog and Leonidas Karakatsanis. The Institute’s expanding expertise led to more interdisciplinary projects, including Balkan Futures, From Enemies to Allies and Water in Istanbul, bringing together archaeologists, anthropologists, historians, urban planners, engineers, and policy makers. Increasingly, the BIAA is collaborating with the other British International Research Institutes to advance common research interests.

Cultural heritage management has become an additional focus, demonstrated by the appointment of a specialist Assistant Director, Işılay Gürsu. The Institute’s main cultural heritage project on the ancient region of Pisidia culminated in the creation of the Pisidia Heritage Trail and guidebook. From 2017-2020, the Safeguarding Archaeological Assets of Turkey project with Koç University ANAMED and ICOM UK focused on raising awareness and providing training. In parallel, the Institute devoted new energy to the conservation of its physical collections. In 2018 Nurdan Atalan Çayırezmez was appointed to develop the Digital Repository, an online platform for the sustainable archiving of data produced by the past and future work of the Institute and its partners. The BIAA’s expanding purview was matched by its physical growth, relocating to new premises on Atatürk Bulvarı.

More on the History of BIAA

For further reading on the history of the BIAA

You can also watch:

A presentation given by Professor Stephen Mitchell at the Anglo-Turkish Institute on 25th October 2012 about the work of the British Institute at Ankara. A 2012 interview with Geography PhD student Samantha Allcock (Plymouth University) on studying and doing research at the BIAA.